The days of Radio Raheem are over, unfortunately. Carrying around a giant D battery powered boombox everywhere you go is about as impractical as taking a desktop computer where ever you go in a suitcase. The boombox was and is an icon of hip hop, even if just in images. Regardless of the cool factor, technology and convenience caught up with the boombox and rendered it obsolete. Do we really miss it?

Part 1: The Death Of The Boombox.

The days of Radio Raheem are over, unfortunately.  Carrying around a giant D battery powered boombox everywhere you go is about as impractical as taking a desktop computer wherever you go in a suitcase.  The boombox was and is an icon of hip hop, even if just in images.

Regardless of the cool factor, technology and convenience caught up with the boombox and rendered it obsolete.  Lets be honest with ourselves though, do we REALLY miss it?

-The boombox was sort of pricey to operate.  Those batteries were not cheap! (and did not last long)

-It was also heavy and not fun to lug around.

-Most of them only played tapes and the radio.

-Was the sound quality all that great?  Not really.

-Lastly, the boombox was always, kind of, begging to be stolen. 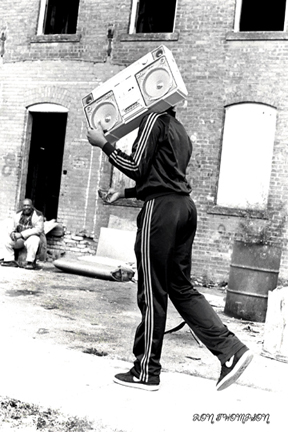 Walkman
Chronologically speaking, lets look at the first little flesh wound to the boombox, the Walkman.  The Walkman made it possible to have the same experience of a boom box, but on a more personal level.  It was way more economical, one or two AA batteries over six or eight D or C sized batteries was huge.  You could put it in your pocket, which made things slightly easier also.  At the time, the sound quality was even pretty comparable.  But the biggest perk to the Walkman was the fact you play what you and you alone wanted to hear.  That leads me to the downside though, it almost defeated the purpose of the boombox.  Part of the point of the boombox was to share your music with others.  Whether on a stoop or a corner, if you had a boombox, you had friends.  The Walkman lacked that social factor.

CD
Maybe the biggest blow to the boombox came with the advent of the CD.  The compact disc was (as we all know) a game changer.  Flawless sound quality, instant rewind and fast forward, programmable play lists, AND they were portable.

Obviously companies like Sony and Panasonic rushed to get this new technology into boomboxes.  But ultimately it was the compact disc’s biggest (and pretty much only) flaw that made it unfeasible for the boombox… the dreaded SKIP.  In its infancy the compact disc was an almost delicate thing.  It was very prone to skip, almost more so than vinyl (ironic).  The portable nature and weight of the boombox made it more susceptible to skipping than the home CD-players and even more than the later portable CD-player (Walkman type of portable).  It was tough to walk with a boombox playing a cd without it skipping.  You couldn’t put it on a table without someone bumping the table and it skipping.  It was kind of a mess. CD-Player
The next major hit to the boom box was the (afore mentioned) portable compact disc player.  After the first couple of generations of portable or “Walkman” cd-players, the companies all stepped up their shock absorption game in a major way.  It became possible to put a cd player in your pocket, have flawless sound quality, and skip around an album instantly for a fraction of the cost of a decent boom box (and astronomically less cost in batteries).  But maybe the biggest perk to the portable cd-player, you could plug it into your home stereo system or a mixer or whatever, and have the same sound quality.  The classic boombox lacked this dual functionality for the most part.  I know that I, personally, had no use for a boombox at this point.

MP3
I’m not even going to get into how the mp3 and/or iPod put the final nails in the coffin of the boombox.  It will always be remembered and be apart of Hip Hop culture (again, even if only in imagery).  And you know, if you think about it… the boombox probably had a better run than the other devices I mentioned.  The Walkman (cd or tape) didn’t have as fruitful of a life as our good friend the boom box.

Uncommon Approach: Back behind the ‘Uncommon Curtain’