What do you get when you blend soul, jazz, pop, hip-hop, and reggae so smoothly that you put the whole world on notice? Enter Brooklyn-based formation Phony PPL. With each album, they seem to be getting better, with last year’s Mō’zā-ik being their most mature and polished work to date.

After Phony PPL’s performance on Dour Festival in Belgium last month, The Find editors Jelger Staal and Jasper Staal got the chance to sit down with this vibrant bunch of talented artists and discuss a multitude of subjects. Ranging from the mindset behind their creative process to their favorite Ninja Turtles.

How does the energy of New York manifest itself in your music?

We’re all from Brooklyn, born and raised. Bed-Stuy, Crown Heights. But I know for sure we are all inspired by things that are from way more places than just New York. There’s so many things: music from Brazil, fashion from Paris, or a word like slang, from this place or that place. From “Je t’aime” to the Portuguese language. So many things inspire us collectively, but ultimately we are all from within New York, and we decide which influences from outside New York we want to allow in our art. Even besides the music; to the way we speak to each other. It’s crazy because living in Brooklyn you can find your next-door neighbor someone who’s not from Brooklyn, and you can find a whole new set of vocabulary words just from them. Those influences find various ways: not only lyrical but also, for example, the way he [points at Matthew Byas] plays drums.

To me, Phony PPL sounds like Stevie Wonder had a lovechild with hip-hop and funk. Can you find yourself in these influences?

There are lots of communal influences. J Dilla, João Donato, Jamiroquai, King Crimson, Earth Wind and Fire… We are all old souls who like to find new old music.

It sounds like you took my vinyl collection and put in a blender.

[Whole group laughs] We don’t go into each song that we make like, “this is going to be pop, this is going to be jazz, or rock”. We like sound. Just different sounds and inspirations. Such as little chords from old records, or we just come up with something on the spot. And that all contributes to just one little section in a song.

I think the first song I heard from you guys was “Either Way”. I loved it because it even reminded me of Queen, in a way… Or what I would even call “white” kind of music. It’s funny, me being a white guy who listens for 90% to black music…

This might be a question you’d ask later. I think it also translates to what Phony PPL could mean—phonetics, sound, all of that. So technically, you could call us the sound people. Sound, in general, could break down what our name could mean. All of which over the years has become multi-faceted in many different meanings, but the sound is just an important part of… everything. So it could be what you call a “white record” or a “black record” but it’s more importantly just music in general. And we all pick up on that. We all produce music individually. So with any track, you can get something really different. Especially with the new album we are working on.

That’s what I really liked about Mō’zā-ik: every song takes you in a different direction and at the end of the record I felt like every part of my brain had like…plugged in. To me, that was really refreshing.

With that record, we went through a bunch of different album titles. But one thing that always rang true is that we wanted to make it different from Yesterday’s Tomorrow. One thing that we always said about the project was that we wanted to make it seem like you are at a museum and that you could walk through each different room, and experience something different. A different era, a different time period. We didn’t stick to a certain time period but if you go to this room you’ll feel a different way, you go to that room you’ll feel a different way. So Mō’zā-ik just picked every part of your brain as you said. I’m happy about that.

Something else I’m wondering about: Who are your favorite NYC rappers?

Is there a difference in playing in Europe, like here on Dour Festival, compared to playing in the USA?

I have to say the biggest difference is the language barrier. It’s subtle because thankfully most places in the world speak English. But it’s nice, that, we come to Europe, that people who don’t have English as their first language make the effort to learn our words and sing our songs. It impacts us a little differently when we are in Europe because in America it’s easier for people to catch on to whatever is going on. In Europe, it seems they make an effort to really hear what we are saying.

Friends, brothers! We are all O-positive blood type! [group laughs] 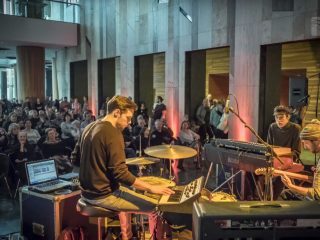 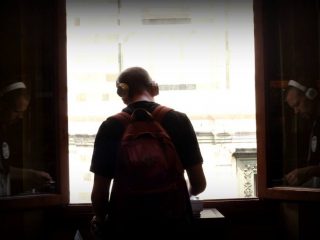