Occasionally, family and friends will refer me to vinyl collections because they know it’s my thing. Usually, it’s just run-of-the-mill stuff that I’m happy to take off of people’s hands; as more of a trash removal service than anything else.

(Words by DJ Shadow, originally published on his blog)

Last year, sometime in April, my dad left a message on my phone saying that one of his longtime friends had some records he didn’t want, and to give him a call. I knew of him, and he had never struck me as much of a music lover…or a lover of much of anything other than old cars. Nonetheless, I called him, set up a time, and thought to myself, ‘What is wrong with me? Why am I going to waste a day driving back and forth to pick up a handful of records I know are going to be bad? Am I that much of an idealist?’

Anyway, the day arrived, and I set off for San Jose, pensive and dissatisfied with my priorities. I found the house, went inside, and observed the small stacks of records. It was the typical scene; a lot of easy listening, pop, light rock. One or two things that I didn’t recognize straight away, but nothing that quickened my pulse even slightly. I loaded about 50 LPs into my car, exchanged pleasantries, and headed home. Errand completed, box checked.

Once home, the vinyl made its way onto my studio floor, as all of my purchases eventually do.  Good, bad, ugly, it all gets processed in due course… that is to say, I evaluate its condition and determine its fate:  keep, sell, DJ fodder, or trash. During this process, I drop the needle on just about everything. Sometimes as a refresher, sometimes because I want to revisit music I’m familiar with, sometimes to check playability. And sometimes just to answer, ‘I’ve seen this record 1,000 times, what IS it exactly?’

When freebies come in, like my dad’s friend’s stuff, it’s an opportunity to scan music I would never ordinarily bring into the studio. Stuff like… you guessed it… easy listening, pop, light rock. Exactly what the collection consisted of. It’s usually pretty brutal… there’s a reason no one wants this stuff anymore.  Still, it’s a process, one that I’ve come to respect enough to let play out. 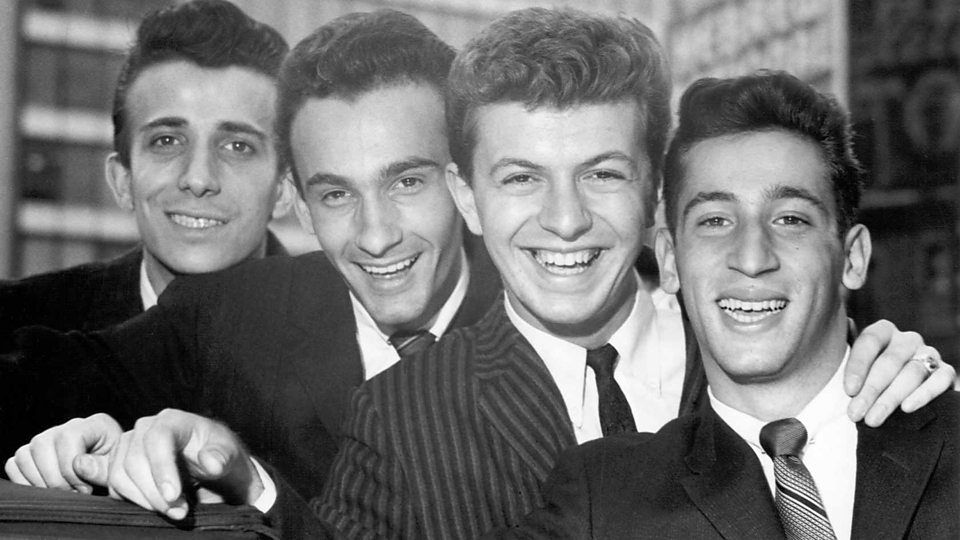 Eventually, I made my way to an album by The Belmonts, who I was familiar with only in a broad sense. I knew they were doo-wop guys, and this album, from the early ’70s, was obviously a comeback attempt. I liked the photos on the jacket, taken by the legendary Joel Brodsky. And Buddah, the label, put out some great stuff. But whatever, it’s still going to be revivalist doo-wop with a ’70s twist. Dropped the needle, and yep, that’s what it was. But it wasn’t offensive in any way… it was heartfelt, a quality effort. Not really my thing, but a nice record. Respectable.

“For many years, I’ve taken a zen approach to collecting… rather than scrambling around, trying to compete with everyone for the same 500 records, I try to take what the world gives me.”

As the record played, I found myself being drawn into the back cover photo. They’re in a candy store with what looks like some buddies from the old days… a pretty tough-looking bunch, really. I thought about New York and New Jersey in the ’50s and ’60s, and how different city life was then. They certainly seemed to wear it on their faces. As I contemplated this, I realized that I had let the music play for quite a while without lifting the needle (this is unusual for me when scanning records that aren’t really in my wheelhouse). I smiled, acknowledging that the record had charmed me to some extent, dousing my cynicism with an earnest nostalgia.

A song ended, and the next one began, an acapella cover of Steam’s AM radio hit “Na Na Hey Hey (Kiss Him Goodbye)”. I let it play for a couple of minutes, and then sat up and said, “Hang on. I need to start this again.” Of course, many of you now know that this is what I would eventually put to use as the singing sample in my song with De La Soul, “Rocket Fuel.”

For many years, I’ve taken a zen approach to collecting… rather than scrambling around, trying to compete with everyone for the same 500 records, I try to take what the world gives me. Very often, what initially seems like a wasted trip later reveals epiphanies that eclipse any agenda I may have had going in. All you have to do is be receptive to it, and make the effort. On that April day, against my better judgment, I made the effort and was rewarded with the inspiration (and musical bed) for the first single from my new album. I’m appreciative for that, for The Belmonts’ talents, and for my dad and his friend for thinking of me. — DJ Shadow

Listen to DJ Shadow’s ‘Rocket Fuel’ via any streaming platform, and stay tuned for his new album…

Article: How Are You Listening? (Part 1)