Without a doubt, the most popular graffiti artist in the world is Banksy, real identity unknown. His art can be traced back to the early 1990’s, but it wasn’t until the turn of the decade when he really started to establish himself as a popular artist. Aside from his tagging which can be found across the world; album covers, art exhibitions, and most recently a film, serve as catalysts for his fame.

Without a doubt, the most popular graffiti artist in the world is Banksy, real identity unknown. His art can be traced back to the early 1990’s, but it wasn’t until the turn of the decade when he really started to establish himself as a popular artist. Aside from his tagging which can be found across the world; album covers, art exhibitions, and most recently a film, serve as catalysts for his fame.

His work strikes a chord with many, particularly youth, for the blunt usage of messages within an art-form that was often regarded as existent only within the margins of society. Banksy isn’t seen as just an artist, but also as a philosopher and political spokesman against capitalism, war, theism, totalitarianism and fascism. By stirring the youth with broad and direct statements, as well as through his constant subversion of authority, Banksy has managed to develop a large following.

The seductive nature of Banksy’s work within the hip-hop community is easy to understand, and can be attributed to two significant factors: 1) the fact that graffiti never had a universal flag-bearer and 2) the ease of his artwork. Graffiti comprises a quarter of the so-called hip-hop culture, but similar to b-boying, it is largely marginalized by emceeing and djing. This isn’t to say it doesn’t earn respect, but few would argue that its stature among the masses is equal to the hip-hop elements centered around music. Although there have been numerous graffiti artists who gained some notoriety prior to Banksy, but none have had a similar universal following.

With Banksy, art is simply a matter of knowing; of understanding the reference, the clear message or the clever joke. Great art transcends such amateur aims.

As a draftsmen, Banksy is nothing less than solid. His work tends to be bold and sweeping, his style so distinct that it is difficult to mistake his work for anyone else. Through his incorporation of elements of surrealism, such as a dog shooting a record player, Banksy allows his vision to remain fresh. This quirky side to his artwork is doubtlessly what makes him so attractive to people around the globe. He also makes heavy use of irony, cleverness, wit, and archness. Banksy’s street art is often centered around a single key idea. Instead of existing as art in itself, his work is often founded on external concepts.

His view of the world is utterly simplistic and in that very agreeable to many, especially youth. Banksy is particularly skillful in taking broad, complex abstractions and reducing them into something palatable. Instead of using ideas as a pretext for his art, his art is a pretext for his ideas. Banksy’s foray into social criticism speaks most strongly regarding this, where his art became a container for his statements.

The ease of Banksy’s work has much to do with his popularity. His work often lends itself to reduction, frequently his work is little more than a simple idea covered by an active imagination. A quick glance at Banksy’s gallery is revelatory of this, his work can be decoded effortlessly. A man throwing a bouquet is symbolic of peace, a depiction of graffiti removal is a tongue-in-cheek reference to the treatment of his own work.

Much of Banksy’s catalog consists of work that is supposed to click; he completely avoids the murkiness and mysteries of life. There is very little engagement of reality; instead, Banksy’s views and interpretations are downright infantile and insipid. With Banksy art is simply a matter of knowing; of understanding the reference, the clear message or the clever joke. Great art transcends such amateur aims. 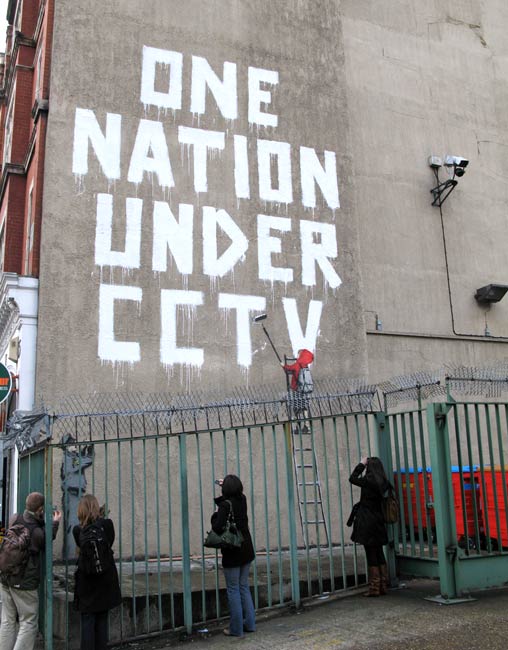 The best of artists are draining, they require an active audience. Banksy offers an alternative, he offers escapism. People love to be flattered, and Banksy’s work caters to this shallow desire. By making art that often has a solution of sorts, people become impressed with their own intellectual capacity. And by extension, they are roused by Banksy’s work. The ideas found within his work are easy and reductionist, completely isolated from life itself. A lay-person can extract the–juvenile, in the case of Banksy–notions with ease.

Banksy uses a reward system to great effect. He creates art that requires a little decoding and essentially remunerates his audience when the work is unlocked. It’s difficult to shrug off the touch of condescension embodied in this attitude. In this aspect, his work hues closer to playing a game of connect-the-dots than it does true art. Banksy doesn’t deal with the complexities of life, instead, he creates games to take us out of reality. His work is doubtlessly accessible, but it’s also trivial.

In many ways, Banksy stands in direct opposition to what great art is

It’s a shame how much attention Banksy has garnered considering the quality of his work. But not out of step with today’s culture. At a time where schlock has completely invaded the arts, it’s no surprise that the likes of Banksy have gained such a massive, global following. Childishly, Banksy presents people with puzzles that must be solved in order to get a glimpse into his own puerile thoughts.

In many ways, Banksy stands in direct opposition to what great art is. He doesn’t offer a new way to live, instead, he provides then a path through which one can escape reality. Through the flattery of his audience, Banksy continues to impress people around the world. Formally, his style is as reductive as the work it creates; that is to say, he mixes trite ideas, often sociopolitical, with a visual flair, all while barely skirting the edges of reality.

Banksy’s art isn’t an expression of life, it doesn’t deal with the truth. And therein lies the fatal flaw that holds him back from ever becoming a great artist.

More: You Are Not Banksy